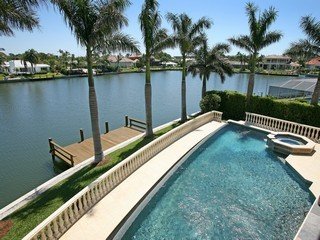 Naples, Florida is a paradise that has been discovered by many looking to own their piece of real estate in Southwest Florida – including some notable celebrities.

Just like us average Joe’s, celebrities are drawn to Naples for it’s quiet sophistication, amazing beaches and privacy. It’s easier to blend-in and avoid the celebrity stalkers of  New York and LA.

There are not many paparazzi or autograph hounds to bother them as they stroll along Third Street South or browse the chic stores at Waterside Shops.

Drawn to the tropical weather and upscale community, Naples has a large population of second home owners — many of whom are wealthy and may own several homes around the world. Celebrities are not much different in that regard. Some are full-time residents and others may live here only part-time or visit periodically when their schedules allow.

As a part-time resident, Larry Bird, former NBA star and president of the Indiana Pacers owns waterfront property in Naples. His home is located in the exclusive waterfront neighborhood of Park Shore The property is currently not listed for sale.

This luxury home, built to Mr. Bird’s specifications, is 6,007 square feet of living area with large media room and waterfront views of Venetian Bay from almost every room. For outdoor entertaining, the home features a tiki hut, summer kitchen and infinity-edge pool overlooking the boat dock. Boat access to the Gulf and beaches is available through Doctors Pass.

Other notable celebrities with homes in Naples include:

In the meantime, if you’re in Naples and run into any celebrities please let them be. Just like you, they deserve a little peace and quiet as they enjoy their homes and the beautiful white sand beaches Naples is famous for.